The most stylish hotel interiors in london

London has a lot of hotels. As of 2020 there are around 14,000 hotel rooms in London, offering visitors a huge variety of choice. However, not all hotels are created equal: some are designed purely for function, whilst others are created to be as stylish as possible.

For your own viewing pleasure then, we’ve put together this list of the most visually appealing hotel interiors in the capital.

Sea Containers was once home to a maritime transport company, which has given this trendy hotel both its name and its design cues, which are reminiscent of a 1920s transatlantic cruise liner. The lobby features a dramatic copper wall shaped like a ship’s hull, whilst a sculpture of bright blue twisted pipes is evocative of the hardware found in the depths of a liner. Further nautical touches include mirrors shaped like portholes in the toilets and striped uniforms for staff. Those with a keen eye for design history will also spot influences from American and European mid-century modernism, Art Deco, Pop Art and 1970s disco, to name just a few, making it a must-stay destination for those who value stylish and beautiful surroundings.

On a much smaller scale than Sea Containers is Artist Residence, a ten-rom boutique hotel that is tucked away down a discrete street in Pimlico. Every room has its own theme, meaning no two are the same, but they all have a relaxed, retro feel thanks to a mix of unique vintage and craft furniture pieces. The whole hotel has a very playful and colourful feel, with modern art scattered throughout and quirky touches all around, such as black rotary dial phones in each room and an old-fashioned school desk for a work space. The hotel also features a restaurant where the relaxed, old school vibe is continued with a selection of contemporary art, cosy banquettes in eclectic patterns and striking copper hanging globe lights.

Though less well known than The Savoy or The Dorchester, The Lanesborough has a similar feel of traditional opulence and elegance, despite only being opened as a hotel in 1990. It isn’t the kind of interior that fans of modernist minimalism will enjoy, but if you love Regency splendour then it’s just the ticket. The dining rooms, tea rooms and corridors of the Lanesborough boasts huge chandeliers, trompe l’oeil artworks, stunning marble floors, intricate plaster moulding, gold leaf detailing and a collection of 18th century paintings. A truly luxurious experience for those who love to relax in the surroundings of old-fashioned style and sophistication.

The Berkeley describes itself as ‘the epitome of modern British luxury’, and it’s easy to see why. The hotel has used a number of famous interior designers to create various spaces, suites and rooms throughout the hotel, including Helen Green, John Heahand Robert Angell. The hotel’s two rooftop suites have been designed by world-renowned interior architect André Fu. Created around a glass pavilion, both suites are suffused with light and feature generous outside terraces with stunning views across London, opulent interiors in muted stone and rock palettes, and are finished with dashes of emerald green and terracotta. A special mention must go to the Blue Bar, designed by the late David Collins, which features walls painted in a mix made up of 50 different shades of the colour, called ‘Lutyens Blue’, after the original panelled walls designed by Sir Edwin Lutyens.

The Ham Yard Hotel is part of the Firmdale hotel group owned by award-winning interior designer Kit Kemp and her husband Tim, and her aesthetic credentials are certainly on show. It has an arty, boutique feel, with bedrooms featuring a very tasteful combination of vibrantly patterned wall coverings and upholstery alongside eclectic furniture pieces and playful ornaments and artworks. Special attention has been paid to textures, with boiled-wool upholstered sofas sitting alongside metallic sculptures and distressed wood. On paper it sounds like it could be somewhat aesthetically challenging, but under the skilful hands of the Kemps it works perfectly.

Located in trendy Shoreditch, The Curtain has an industrial setting featuring exposed brick, dark walls and huge factory windows. The interior decoration is a clash of mismatched design with stylish tartan armchairs sitting alongside stag heads wearing bandanas and somehow it all melds together seamlessly. As well as having a rooftop restaurant and impressive outdoor lido with views across East London, The Curtain also boasts the Green Room cocktail bar. Here, the design is a chic mix of the industrial and the sophisticated, with rough concrete sitting easily alongside plush velvet furniture, a bar made of the kind of beautiful green tiles you might more usually find in a traditional London pub, and contemporary brass fittings hiding in a riot of leafy plants.

Fancy a stay in a modern English country house that is slap bang in the centre of London? Then this is the hotel for you. Despite the fact that the Grazing Goat is located just a few minute’s walk from the hustle and bustle of Oxford Street, the interior of the will make you feel like you’ve just stepped into a delightfully calm hotel in the remote Cotswold countryside. The rooms are simple and elegant, with plenty of blond wood, muted tones and fresh, snowy Egyptian cotton linen. It isn’t all style over substance though: there are touches of utilitarian chic in the shape of industrial-style bedside lamps and discrete Dyson fans. On the bottom floor is a bar and restaurant, also designed with the countryside in mind, where diners can enjoy the semi-formal surroundings and soak up the atmosphere of a weekend away from the city, without leaving the city. 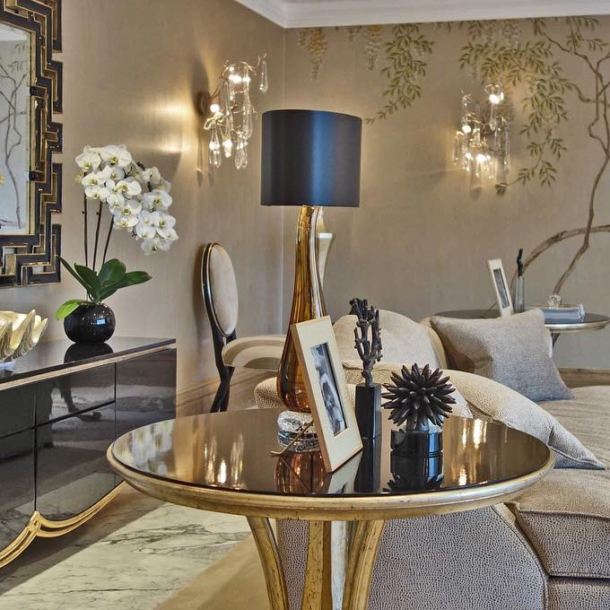